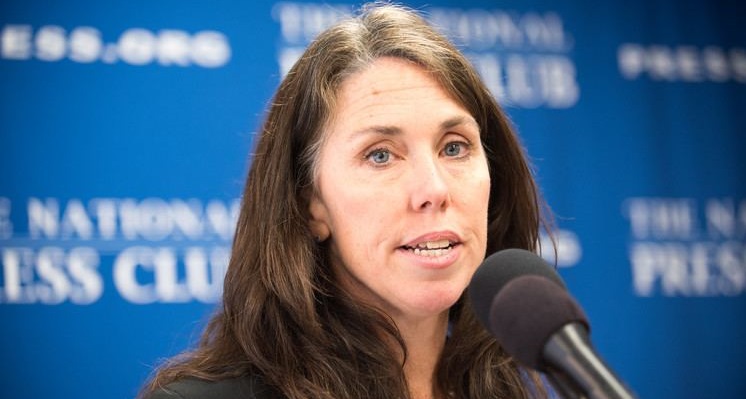 Alison Fitzgerald Kodjak, health policy correspondent for NPR, was elected the 112th president of the National Press Club, the world’s leading professional organization for journalists, on December 7, 2018.  According to a release:

A three-time George Polk Award-winner over the course of her lengthy career in both print and broadcast journalism, Kodjak will officially assume the duties of the presidency on January 11, 2019.

Kodjak, in her acceptance speech before her fellow members in the Club’s Truman Lounge, pledged to uphold the work of her predecessors in advocating for press freedom worldwide:

“My goal as president is to see the club become a central player in the fight for the future of quality, fact-based journalism here in the US and fight for the freedom of our colleagues around the world.”

A lofty mission, Kodjak continued, made more achievable through collaboration and fellowship:

“Journalists today are under a huge amount of pressure.  There are economic challenges – but even more difficult are the attacks on our credibility and character. And by habit, we tend to stay in our lanes – we work for the Post, AP or CNN and we compete. We belong to our own groups – WHCA, IRE or NABJ. But the National Press Club is a place where we break those walls down and gather – maybe over a beer — enjoy each other’s company, and help each other become better journalists.”

Kodjak, who has enjoyed a successful career covering a wide array of subjects in a variety of platforms, is well-suited to foster that sense of camaraderie amongst her journalism colleagues.  Before joining NPR in 2015, Kodjak spent two years at the Center for Public Integrity, leading projects in financial, telecom, and political reporting. Prior to joining the Center, she spent more than a decade at Bloomberg News, where she wrote about the convergence of politics, government, and economics, and as part of Bloomberg’s investigative team, reported on the bankruptcy of General Motors Corp. and the 2010 Gulf Oil Spill. A graduate of Georgetown University and Northwestern University’s Medill School of Journalism, Kodjak is also the co-author of the book “In Too Deep: BP and the Drilling Race that Took It Down,” published in 2011 by John Wiley & Sons.

A January 12 inaugural gala is planned for the new president of the Club, which was founded in 1908 and includes thousands of members worldwide.

Elected to the Board of Governors were: Lisa Matthews of the Associated Press, Ferdous Al-Faruque of MedTech Insight, Emily Wilkins of Bloomberg BNA, Del Quentin Wilber of the Los Angeles Times, freelance journalist Antonella Ciancio, and Danny Selnick of Business Wire.