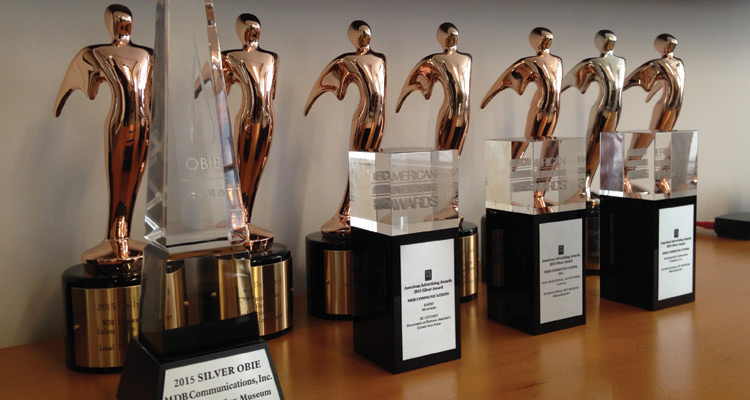 2015 has proven to be a successful awards season for MDB Communications. The agency has won 11 awards, including five ADDYs, four Telly Awards, one OBIE Award and one Fleurry Award.

MDB’s “Department of National Insecurity” radio campaign for the D.C. Lottery has won two Silver Local ADDYs for a single spot and campaign. “#MetroSmartSpy,” the agency’s integrated social media campaign for the International Spy Museum, has been named a Silver winner in Local Non-Traditional Advertising. “#MetroSmartSpy” has also been recognized at the district level, receiving a Silver award for Integrated Campaign.

The Telly Awards have recognized several of MDB’s entries, including a video for HEROES, Inc. titled “Of Heroes and Heartbreak,” a Bronze winner in the Film/Video and Online Video categories. The agency’s “But Really, What’s the Rush?” spot and “Unless I Win the Lottery” campaign for the D.C. Lottery have won Bronze awards in Entertainment and Promotional/Branding, respectively.

In addition to the ADDY and Telly wins, MDB won a Silver OBIE, a national award recognizing excellence in out-of-home executions, in the Entertainment category for the “Real Spies. Real Stories.” campaign for the International Spy Museum.

Lastly, MDB, a Capitol Communicator sponsor, received a Fleurry Award for the TV spot, “Unless I Win the Lottery—Where’s Reggie?” from La Fleurs, the premier global lottery trade publication.