“There’s something about Pum Lefebure, cofounder of Design Army, that’s reminiscent of a D.C. superhero—the Washington kind, not the comics kind,” states Adobe 99U, which, it states, has a “mission” to “empower the creative community.”

An article in Adobe99U, excerpted here, states: “In sequins and enormous glasses that magnify her blue-winged eyeliner, she marches over ladders and ducts at the construction site of her newest project, a photography studio and creative hub for the local artistic community. It’s not the first time Lefebure has set her sights on the capitol’s culture; Design Army has worked with Smithsonian, CityCenter DC, Washingtonian, and the Washington Ballet. Now, dwarfed by 25-foot ceilings and washed by the light from a massive window wall, Lefebure is plotting a vision for the future of greater D.C. design.

“Washington and ‘creative hub’ might seem as alike as two peas in a swindler’s shell game. The name Washington rings drab government buildings, chummy lobbyist lunches, and empty pavements when everyone goes home to Virginia at the end of the day.

“An arts scene here? Tell me another one.

“But Lefebure insists that the city has its own vibrant base, and it’s mushrooming. Sure, D.C. rolls through four- and eight-year cycles as Democrats and Republicans pendulum swing in and out of the White House, but there are also stable institutions holding down the fort, like the World Bank, big corporations, and international embassies. “It’s an extremely international group of people and they are smart,” Lefebure says.

“Smarts, style, and a destination food scene have started to converge into a recognizable trend that usually spells massive change for a city. In the chicken and egg dance of gentrification and urban revitalization, artists and designers have been pushed out of the Northwest quadrant of Georgetown and Dupont Circle, and into new neighborhoods. The smart ones, like Lefebure and her husband Jake, embraced the change and doubled down, leapfrogging from business savvy to entrepreneurialism by investing in real estate. Lefebure now owns four properties, including the Design Army building and the new 10,000 square-foot studio a 10 minute drive from downtown.

“At the moment, Lefebure’s focus is on Design Army’s new creative space under construction across the border in Maryland. Jake snapped up the cavernous space, perched on a hill overlooking a highway, before it went on the market—it’s down the road from the storage unit where he tinkers with motorcycles on the weekends. The tire-churned dirt courtyard is about as serene as a construction site can get—like Gatsby’s house before all the guests arrive. Lefebure envisions a glittering future of photo shoots, TEDx events, dance performances, test kitchen dinners, and free painting classes for students on the weekends. There are dressing rooms for models and dancers in an upstairs balcony, a workshop, and garage doors so cars can drive in for commercials. Lefebure is calling it At Yolk after the rich core of an egg, the genesis of creation.

“”There are hints of Lefebure’s entrepreneurialism in this project. Revitalization is stirring in Maryland. Design Army is working with a client to rebrand another neighborhood in Maryland, much like the D/CITY initiative. They anticipate that it will take 10 years for the At Yolk neighborhood to take off. (But remember when Design Army’s timeline to self-sufficiency happened in one-sixth the time expected?) In the meantime, they plan to recoup their investment with market rate rents—adjusted based on the projects, space use, and whenever they need to pay back a favor or want to support a friend.

“Our space visit runs long, and we end up speeding in Jake’s car toward Union Station so I can catch the train. Lefebure runs with me, her straight hair flying, past the buses and the businessmen, to the tracks. “Don’t stop,” she says. When I make it to the platform and turn to see her—bespectacled, be-sequined—stretched out in a Warrior I-style lunge to wave goodbye, her arm raised like a discus thrower, like a D.C. superhero.”

You can read the full article here.

Lefebure is also featured in The Kinfolk Entrepreneur, in which more than 40 creative entrepreneurs from around the world offer tips, advice and inspiration for anyone hoping to forge their own professional path. 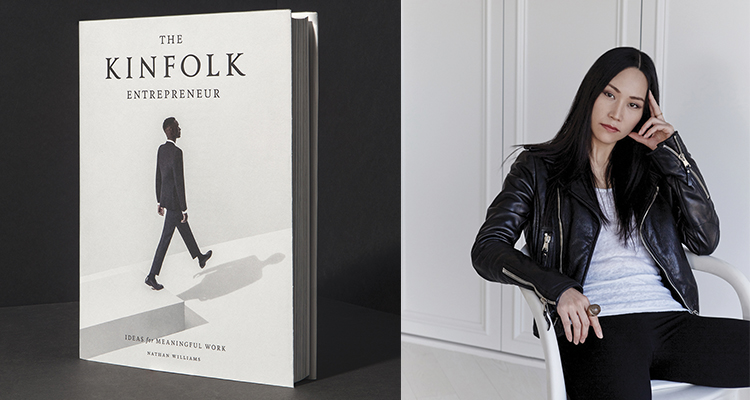