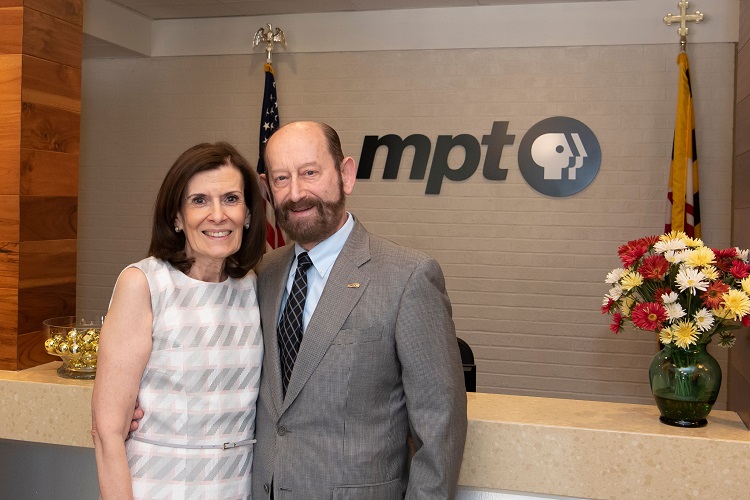 Maryland Public Television recently conducted ceremonies to mark the opening of The Irene and Edward H. Kaplan Production Studio at its Owings Mills campus. The event was the culmination of a 20-month construction project making the now 8,480 sq. ft. production studio among the largest in the Public Broadcasting Service system and the Maryland/Delaware/Virginia region.

MPT’s Studio A first opened in 1969 when the statewide public TV network opened its headquarters facility. The then-4,800 sq. ft. studio served as MPT’s primary production space for 50 years, supplemented by two smaller studios that continue to operate.

With funding from the State of Maryland, MPT embarked on a $9.54 million project to significantly expand and upgrade Studio A and an adjoining front entrance plaza. The project groundbreaking took place during a celebration marking MPT’s 50th anniversary on June 28, 2019. Work commenced in March 2020.

The expanded studio is now named for Irene and Edward H. Kaplan to honor and thank the Montgomery County residents for their support of MPT and its mission over several decades. Edward H. Kaplan is chairman of MPT’s governing body, the Maryland Public Broadcasting Commission.

“The naming of this studio reflects the significant involvement that Eddie and Irene have invested in MPT over the past 24 years,” explains MPT President and CEO Larry D. Unger. “They strongly endorse the work of MPT and do all they can to further it. The couple’s vision and commitment has resulted in the creation of the New Initiatives Fund and Chesapeake Bay-related initiatives that bring so many wonderful MPT productions to life. Suffice it to say that the Kaplan name is on this structure because it deserves to be.”