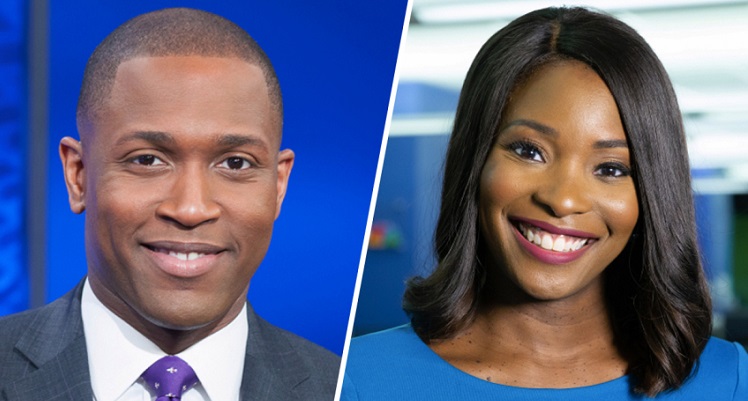 During his decade-long tenure at NBC4 in D.C., Gilchrist, left in photo, was co-anchor of the station’s morning news program with Eun Yang and “played a key role in local political coverage, participated as a key editorial lead in the station’s “Inequality in America” franchise and represented NBC4 at dozens of appearances throughout the Washington region,” stated a NBC4 release.

Gilchrist, who also has filled in as an anchor on MSNBC, previously worked as a reporter and anchor for WWBT-TV, NBC’s station in Richmond where Gilchrist was raised.

Yang’s new co-anchor is Jummy Olabanji, right in photo, a native of Fairfax County, VA, who started her career as an NBC4 intern while attending Virginia Tech. After stops at other television stations including WJLA-TV in D.C. and WNBC-TV in NYC, Olabanji returned to NBC4.  She and her husband, a political journalist, live in D.C.

Gilchrist is not the first NBC4 journalist whose career continued at NBC News after leaving the station. Today Show anchors Savannah Guthrie and Craig Melvin and correspondents Miguel Almaguer and Meagan Fitzgerald are also NBC4 alumni.