Nearly 200 of the region’s public relations practitioners gathered at the National Press Club in Washington, D.C., on September 22 as the National Capital Chapter of the Public Relations Society of America (PRSA-NCC) honored PR programs, products and campaigns at the 48th annual Thoth Awards Gala. 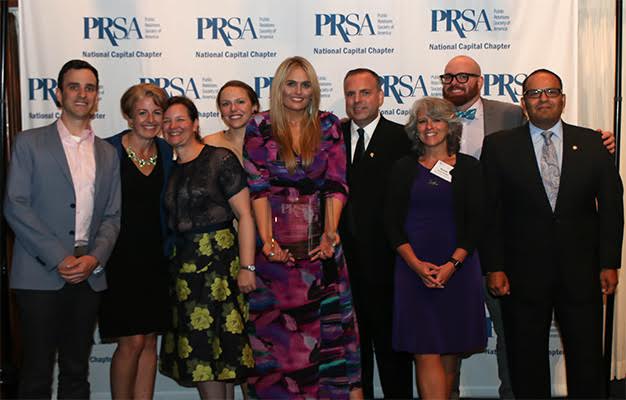 The National Education Association was presented with the chapter’s “Best of Show” award for its Ending No Child Left Behind So That Every Student Succeeds campaign. According to PRSA-NCC, with limited budget and staff, NEA created an unprecedented, comprehensive communications campaign that was instrumental to last year’s passage of the Every Student Succeeds Act. (The NEA team that accepted the award is pictured above.)

NEA’s campaign was also the recipient of Thoth’s inaugural award for the Outstanding Use of Research, Measurement and Evaluation, a new category presented in partnership with the Institute for Public Relations. That award was also given to the National Institute of Diabetes and Digestive and Kidney Diseases (NIDDK) with Hager Sharp for the Diabetes HealthSense campaign.

The evening event featured guest speaker Mike Melia, a senior broadcast producer with PBS NewsHour. Melia offered commentary on the critical role PR professionals provide to the media. “It’s important for members of the news media to have a Rolodex of credible PR sources to write and report on stories that matter, and vice-versa. Given the rapid changes in how news events are being covered today, I enjoyed meeting with some of the outstanding communicators in the nation’s capital region. I am grateful to PRSA-NCC for giving me the opportunity to address attendees and PRSA members at this premier event,” said Melia.

“It’s an honor to recognize outstanding achievement in the public relations profession in our nation’s capital—our Thoth Award winners truly represent excellence,” said Sultana F. Ali, APR, president, PRSA-NCC. “On behalf of PRSA’s National Capital Chapter, we are deeply appreciative of our sponsors, attendees, award winners and organizations who submitted entries. This diverse group represents different facets of the profession, and the Thoth Awards are a wonderful opportunity to come together, connect, and celebrate best practices.”

As part of the program, Mitch Marovitz, APR, Fellow PRSA, and Maria Rodriguez, pictured above, were inducted into the National Capital Public Relations Hall of Fame. Marovitz, the immediate past president of PRSA-NCC, currently chairs the public relations program at the Graduate School of the University of Maryland University College. Rodriguez is co-founder and president of Vanguard Communications, a Washington, D.C., Hispanic, woman-owned public relations and social marketing firm specializing in reaching diverse communities. (Capitol Communicator has profiled both Marovitz and Rodriquez, and you can find their profiles in our Profiles section.)

Additionally, the CEO of PRSA national joined the attendees to commemorate excellence in the profession and offered remarks to the room.

“With the significant contributions taking place throughout the Washington, D.C., area in our business, the top-notch work generated by the professionals within PRSA’s National Capital Chapter is looked to as a model of excellence nationwide,” said Joseph P. Truncale, CEO of the national PRSA organization. “I’m proud to congratulate the Thoth Award recipients and certificate winners, who have established themselves as role models for the public relations stars of tomorrow.”

The PRSA-NCC awards are named after Thoth (pronounced “tot”), an Egyptian god of wisdom who was a mediator and scribe, credited as the inventor of communications and writing. In the spirit of Thoth, PRSA-NCC honors D.C.-area PR professionals for their outstanding contributions to the profession.