Virtual Reality technology is often thought of as impractical; the effects look great in movies and video games, but most people don’t see the real-life applications for VR. That’s a misconception that I’m trying hard to dispel everyday through my work at HighRock; a big part of my work is bringing Virtual Reality to the forefront of consumer’s minds by creating Architectural Visualizations.

The Future of Architecture

Architectural Visualization (or “Arch Viz”) is a tool for architects and designers to digitally build 2D or 3D models of proposed buildings. Since it’s made for and by architects, Arch Viz utilizes the existing wealth of knowledge in design principles, including massing, flows, relationships of shapes, etc. By coupling Arch Viz with Unreal Engine, a tool used by video game developers to bring their ideas to life, we can grow the field of Arch Viz in groundbreaking ways.

Unreal is a game engine that allows designers to preview and build their projects for VR, and stores created assets for future use. With the advent of DataSmith, a workflow tool that allows for easy import into Unreal Engine, 3D artists can quickly bring their work into Unreal Engine and capitalize on Unreal’s powerful array of tools. Using these two tools and 3DS Max (where I start my initial work and build assets), I have been able to create some exciting Architectural Visualizations.

In my work for Arch Viz, I use architectural photography to build 3D models of homes and spaces. Recently, I have been doing a study of a modern residential experience for Unreal to be VR ready.

The goal of this study has been twofold: one, to test the workflow between 3DS Max and Unreal using DataSmith, and two, to have the opportunity to design a home around the perspective of first-person walkthrough. This method of designing is opposed to traditionally designing and building a structure, and then hoping it looks good from the end user’s perspective. Instead, this experiment allowed me to build the home around the person viewing it. For a recent project, I began with reference photography of an existing modern home, and then modified it for a VR walkthrough. As Arch Viz through VR becomes more popular, I wanted to share some notable features of the design process. These are design considerations that any VR artist will have to take into consideration when creating a new environment. 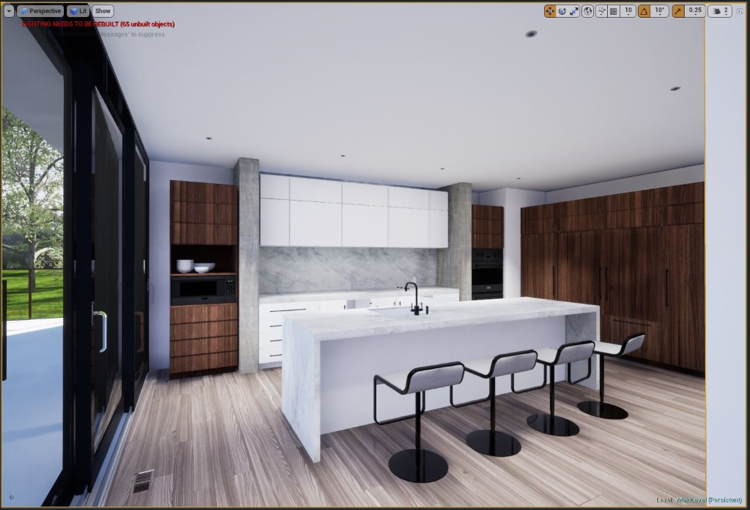 For the bedroom and bathroom, there was no original reference photo to build from, so I had to design them from scratch. Importing my design into Unreal and then previewing in VR allowed me to continually refine the design for my dream bathroom. Through this process I was able to play with the layout and massing of shapes until I arrived at a design I was happy with. I wanted a user to walk in and immediately be greeted with a beautiful view.

Below are screenshots of the drafting process as seen in 3DS Max, followed by the final product in Unreal Engine. One of the huge advantages to working in Unreal Engine, is that once the work has been done, it can be easily migrated between projects. This allows the designer to focus more energy on the layout, quickly populate it, and bring the scene to life. For example, the vegetation (seen through the window) are optimized for Unreal, and were quickly migrated from a previous project. So now when the time comes to move on the next house, all the materials, furnishings, can be easily implemented in a new setting.

The field of Arch Viz and VR is growing, and HighRock is on the forefront of this trend. We’re utilizing a wide range of programs to create beautiful environments with VR-ready assets that are ready to plug into your next project. This specific project only scratched the surface of what Unreal Engine has to offer, and I hope to further explore its tools for Arch Viz in the future.

Care to explore Virtual Reality in person? Be sure to visit HighRock’s exhibit at the Mid-Atlantic Marketing Summit this Thursday to talk with our team of 3D and VR artists.

As a graduate of the University of Baltimore, Jennings is putting her degree in Simulation and Digital Entertainment (an interdisciplinary computer science program) to good use as part of our 3D team at HighRock’s Baltimore office. Her illustration, storyboarding and 3D animation skills result in impactful visual solutions for our clients. In addition to making the world a more beautiful place through the story and emotion of her art, Jennings loves running, hiking, shopping and playing video games.

HighRock is a Capitol Communicator sponsor.