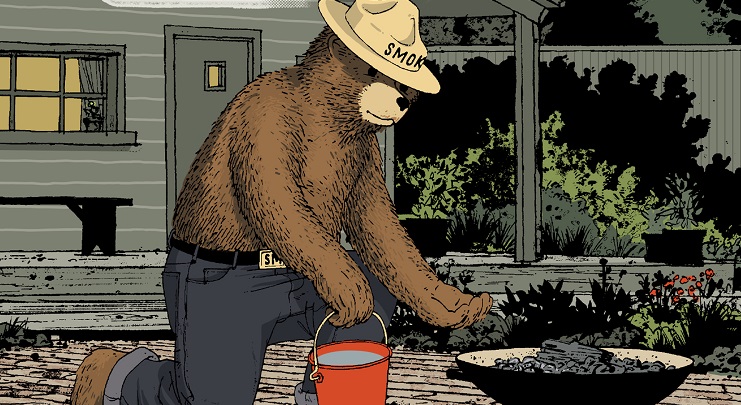 While his look has changed quite a bit, his message has shifted only slightly, states NPR, which added that “Smokey’s roots go back further than his first post. In 1942, a Japanese sub attacked an oil field in southern California.

“Next to the oil field was the Los Padres National Forest, and officials worried about the effect on the war effort if the forest itself had been attacked. So the War Advertising Council developed a campaign to warn of the danger of forest fires.

“The original posters were quite scary in nature,” said Wendy Melillo, an American University professor who has written about Smokey. “So they had the face of a Japanese soldier with a lighted match and a menacing grin and a slogan that said, ‘Careless matches aid the Axis.’ ”

“When the war ended, the Forest Service needed a new way of conveying the danger of forest fires. At first they used Bambi, but Disney controlled that character.

“The Ad Council then hired artist Albert Staehle, who brought us Smokey.

“Smokey’s look had changed by 1951; he gained a shovel and a stronger demeanor than his softer first appearance.

“”The Forest Service wanted, you know, something strong,” Melillo said. “But it wanted it animated to be appealing … to children and families. And so the first Smokey is a really sweet looking bear with a pair of jeans on and he’s holding a bucket of water and he’s pouring it over the campfire.””
More here.
← Previous Article Next Article →