A new Pew Research Center survey of U.S. adults finds that the social media landscape in early 2018 is defined by a mix of long-standing trends and newly emerging narratives. 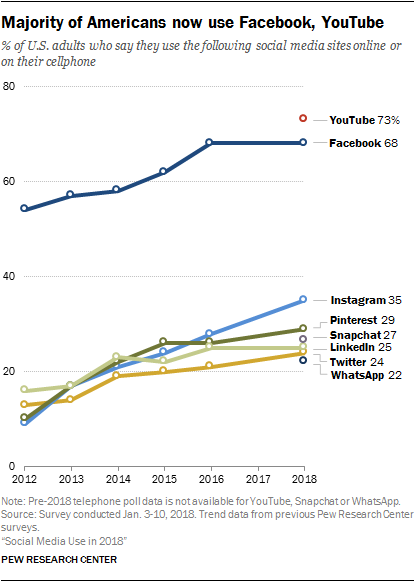 According to Pew, “Facebook and YouTube dominate this landscape, as notable majorities of U.S. adults use each of these sites. At the same time, younger Americans (especially those ages 18 to 24) stand out for embracing a variety of platforms and using them frequently. Some 78% of 18- to 24-year-olds use Snapchat, and a sizeable majority of these users (71%) visit the platform multiple times per day. Similarly, 71% of Americans in this age group now use Instagram and close to half (45%) are Twitter users.

“As has been the case since the Center began surveying about the use of different social media in 2012, Facebook remains the primary platform for most Americans. Roughly two-thirds of U.S. adults (68%) now report that they are Facebook users, and roughly three-quarters of those users access Facebook on a daily basis. With the exception of those 65 and older, a majority of Americans across a wide range of demographic groups now use Facebook.

“But the social media story extends well beyond Facebook. The video-sharing site YouTube – which contains many social elements, even if it is not a traditional social media platform – is now used by nearly three-quarters of U.S. adults and 94% of 18- to 24-year-olds. And the typical (median) American reports that they use three of the eight major platforms that the Center measured in this survey.”