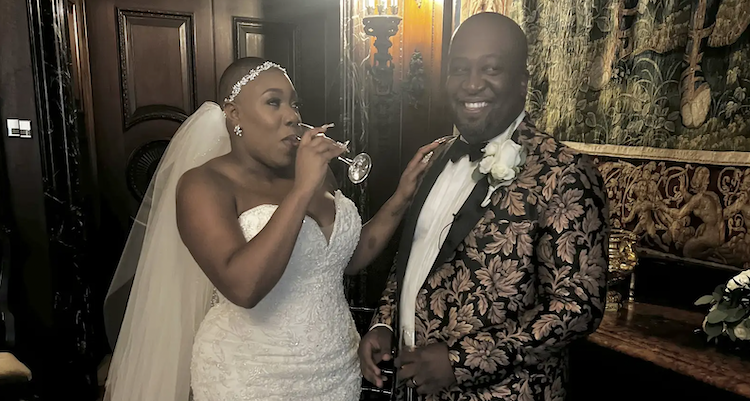 After a year-long engagement, MSNBC host Symone Sander said “I Do” to Shawn Townsend in a surprise ceremony at the historic Larz Anderson House on Embassy Row in Washington, D.C. Townsend is a principal in Dewey Square’s Washington, D.C, office.

Only a few guests knew the couple was getting married when they exchanged vows in front of an intimate group of family and friends. Pastor Dededrick O. Rivers, of Ward Memorial AME Church, a close friend and advisor of the couple, officiated the ceremony. As the couple exchanged vows, Townsend called Sanders his “ride or die.” “It’s the moments behind closed doors that we’ve shared … whether it’s me complaining about Real Housewives, a political debate or photobombing my Zoom calls. It is all time well spent together,” he laughed.

Sanders, states Wikipedia, is an American political strategist and commentator. She served as national press secretary for Democratic presidential candidate Bernie Sanders during his 2016 presidential campaign. She left the campaign abruptly in late June 2016, saying “she was not let go and that leaving the campaign was her decision.” In October 2016, she was hired to be a Democratic strategist and political commentator by CNN. In April 2019, Symone Sanders joined the 2020 presidential campaign of former vice president Joe Biden as a senior advisor, and after Biden won election, was named chief spokesperson and a senior advisor for Vice President Kamala Harris. Sanders left that position at the end of 2021 and joined MSNBC in 2022  as host on weekends.