The Washington Post reports that Rachel Orr and Virginia Singarayar have been promoted to senior design editors.  The Post provided the following background in Orr and Singarayar:

During the past year, Rachel, shown above, has taken on an expanded portfolio, managing the design strategy and staff for The Lily, By The Way, Launcher and Voraciously.

She has worked tirelessly to create consistent branding, efficient workflows and successful visual storytelling strategies for each group and has simultaneously established herself as the design team’s expert in commissioning illustrations for cross-platform promotion.

As a design editor since 2019, Rachel is a creative leader who approaches her work and designers with a compassion that drives creativity and team growth, making her an excellent fit for this role.

Rachel began her Post career in 2013 as a designer for Express. She joined the newsroom in 2014 as an original member of Team Rainbow, designing for The Post’s Select app. She is a founding member of The Lily and By The Way and was instrumental in developing each brand’s visual identity.
Rachel’s work on our apps, The Lily and By The Way has been recognized by the Society for News Design, the Society of Publication Designers and the Webbys. Prior to joining The Post, Rachel worked as a designer for the Gannett Design Studio in Phoenix. 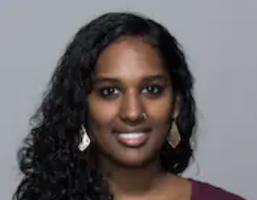 Virginia, above, is being recognized as a senior design editor for her consistently high impact in Sports, and for taking on complex assignments in Business and Tech.

In addition to leading the Sports design desk through two Olympics in the past year, Virginia has overseen the development, branding and daily workflow of two verticals: Launcher and Help Desk.

As a design editor since 2019, she’s been an ardent proponent of design and of her designers and their place in the newsroom. Virginia’s talents include attention to detail and an infectious enthusiasm that inspires others. She excels whether coordinating special sections in print (March Madness and Noah Lyles) or handling ambitious digital projects, such as covid winter, “The architecture of war,” Olympics XR or the inflation explainer

Virginia joined The Post as a designer in 2014 from the Minneapolis Star Tribune. She guided sports designers through championship title runs of both the Capitals and Nationals. Their work has been recognized with numerous awards and medals in recent Society for News Design contests.