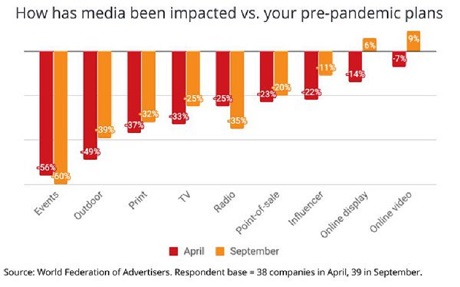 “Guarded optimism” is how analysts at the World Federation of Advertisers characterize responses to the federation’s fourth tracking study on the impact the COVID-19 pandemic is having on marketing and media spending plans worldwide, reports MediaPost, which adds: “Significantly, the member companies surveyed have greatly normalized their marketing campaign plans, with more than half now saying they no longer are impacted by the pandemic, while less than a quarter (23%) say they have been deferred 6 months or longer at this point.

“While media spending has not seen quite the rebound in normalization, there are pockets of improvement — especially for digital media, which are now in positive territory, while out-of-home, print, TV, and influencer media spending have all improved from the kinds of cuts they were experiencing earlier this year.

“Only events/experiential marketing and radio have deteriorated further.”