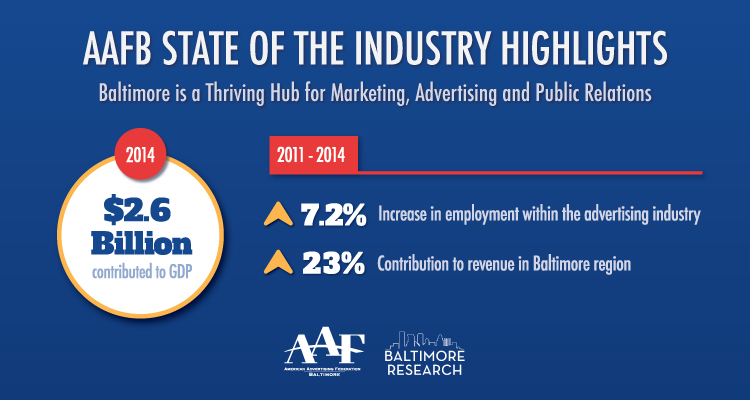 The American Advertising Federation of Baltimore (AAFB), established to promote and support Baltimore’s ad community, released results of its “State of the Industry” study that focused on the Baltimore region. The findings show Baltimore is a thriving hub for marketing, advertising, public relations and printing businesses.

The “State of the Industry” study analyzed employment, revenue and media expenditures from 2011 through 2014. It found:

• In 2014, the Baltimore advertising industry contributed $2.6 billion in gross domestic product (GDP) for the private, public and government sectors in the region.

• Since 2011, the Baltimore region experienced a 7.2 percent increase in employment within the advertising industry, with annual employment reaching 13,400 in 2014.

“It is exciting to hear the Baltimore advertising industry is thriving as a major contributor to the economic climate of our region,” commented Ariel Deitz, president, AAFB. “The upward growth trajectory we’re experiencing is a key selling point when attracting new professionals to the area and retaining young talent. The AAFB looks forward to continuing our support of the growing Baltimore advertising community.”

The study was conducted in partnership with the Regional Economic Studies Institute (RESI) of Towson University and Baltimore Research, evaluating the economic climate and growth of the local industry, including employment, revenue and media expenditures.