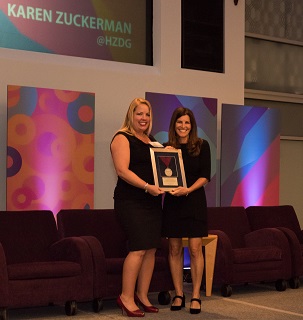 Zuckerman, – right in photo receives award from Jodie Warren, AAF-DC President – said she was really humbled to be presented the Silver Medal Award and, in her remarks, said you can help make your own luck – she hates the word “no”.  She added that “it’s all about relationships” and that she talks to people to both make connections as well as to build trust.  Finally, she said, “you can have it all” but you have to be comfortable at not being a perfectionist.

Earlier in the day, attendees heard, in separate sessions, from representatives of The Washington Post and the New York Times.  David Leonhardt of the Times said that mistrust of the media is a real problem, considering that Wikipedia is more trusted than many traditional news organizations.  He said that many publications, especially smaller ones, will go out of business, but new ones will be created to take their place.

He added that journalism should not be judged by format – i.e., print – but by the ability to give readers a fuller sense of the story by becoming more visual, which can be done online.

The same theme was stated by Jeremy Gilbert of The Washington Post, who said there has always been great journalism, but not great technology which allows for a greater level of engagement with readers and the ability to create stories tailored to the needs of each reader.

In addition, Gilbert said that the media must now reach out and find its audiences, rather than wait for its audiences to find them.

In addition, other topics covered at yesterday’s day-long session included design thinking, content, effective use of data, and tips on crisis communication.