Americans assigned a value of nearly $1,200 per year to the array of free, ad-supported services and content currently available to them on computers and mobile devices, according to a groundbreaking survey conducted by Zogby Analytics. More than 85 percent of respondents said they preferred an ad-supported Internet model instead of paying for online content, and three-quarters said they would reduce their online activities “a great deal” if they had to pay for those services and content. 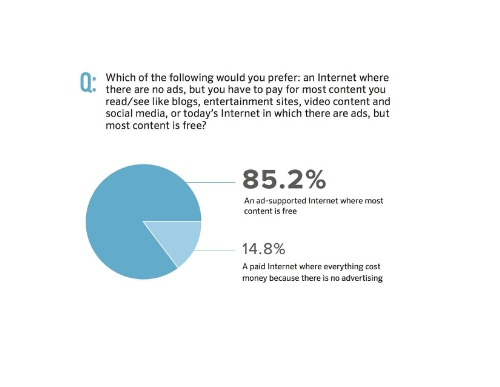 Commissioned by the Digital Advertising Alliance (DAA), the Zogby Analytics poll of 1,004 adults sought to better understand the aggregate value that Americans perceive in the major types of services and content made available free to consumers because of advertising. Respondents were asked to estimate how much people would have to pay for 17 different types of online services and content, ranging from e-mail to video and weather, if they were offered only on a subscription basis rather than for free with ads.  Significantly, respondents assigned a combined value of $99.77 per month to this combined package of free, ad-supported services – or $1,197.24 per year.

“This survey shines a spotlight on the critical role that ad-supported content and services play in the lives of nearly every American, and it underscores the importance of the DAA’s role in providing meaningful, accountable consumer choice for interest-based advertising to help fund that ecosystem,” said Lou Mastria, Executive Director of the DAA. “Consumers see tremendous value in the ad-supported content and services they use, and they overwhelmingly support the current ad-supported model. Thanks to YourAdChoices, consumers can control interest-based ads on their computers and mobile devices, thus building confidence in the ad-supported model that meets those consumer needs.

Among the survey’s findings:

Zogby Analytics was commissioned by Digital Advertising Alliance to conduct an online survey of 1004 adults in the US. The survey was conducted from April 19-20, 2016. Based on a confidence interval of 95 percent, the margin of error is +/- 3.2 percentage points.

The Zogby survey’s full findings can be found on the DAA website.

About The DAA Self-Regulatory Program

The DAA Self-Regulatory Program (http://www.youradchoices.com and http://www.digitaladvertisingalliance.org) was launched in 2010 by the Digital Advertising Alliance (DAA), a consortium of the nation’s largest media and marketing associations including the 4A’s [American Association of Advertising Agencies], the Association of National Advertisers (ANA), the American Advertising Federation (AAF), the Direct Marketing Association (DMA), the Interactive Advertising Bureau (IAB) and the Network Advertising Initiative (NAI), with the advice of the Council of Better Business Bureaus (CBBB). These associations and their thousands of members are committed to developing effective self-regulatory solutions to consumer choice for online data.