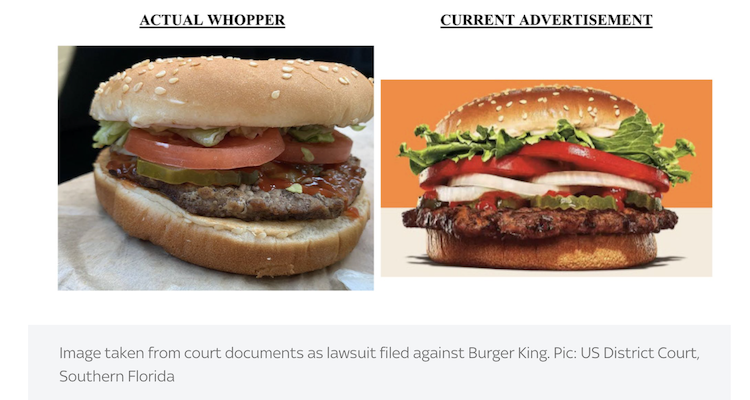 Four Burger King customers are suing the chain over its marketing, claiming that the company makes the burger look about 35% bigger in its advertising than it is in reality, reports CBS News.

The plaintiffs in the lawsuit, which was filed on March 28 in the U.S. District Court for the Southern District of Florida, are seeking monetary damages for anyone who was “deceived” by Burger King’s advertising, although the filing doesn’t name a monetary target.

“Burger King does not comment on pending or potential litigations,” a Burger King spokesperson said in an emailed statement sent to CBS MoneyWatch.

According to CBS News: “The lawsuit alleges deceptive trade practices, with the filing claiming that Burger King started to “materially overstate the size of its burgers” in ads beginning in 2017. While the marketing images of the Whopper may have grown bigger, the “recipe or the amount of beef or ingredients contained in Burger King’s Whopper has never changed,” the lawsuit claims.

“The class-action lawsuit alleges that Burger King’s size inflation doesn’t stop at the Whopper, noting that ads also overstate the size of menu items like the Impossible Burger, the Big King and the Bacon Double Cheeseburger, among other items.”