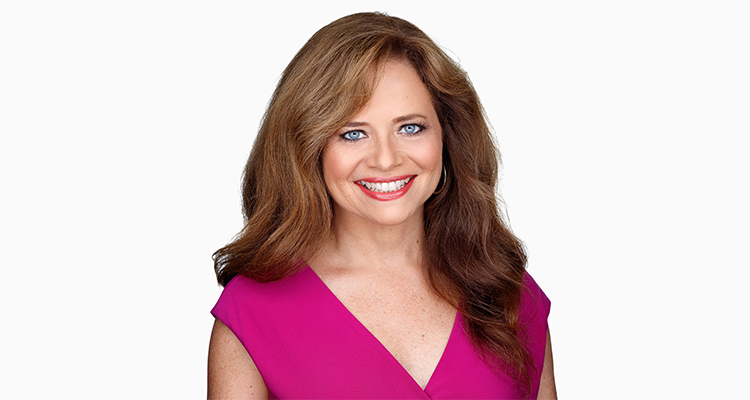 Capitol Communicator has been interviewing people who are or have been in the media about their careers and the media.  Below is our Q&A with Andrea McCarren, who was a reporter for nine years at Channel 9/WUSA in Washington, D.C. Her professional career includes covering the White House for ABC News; and a DC-based correspondent for NBC News, where she covered the White House, Pentagon and Capitol Hill. In addition, she was a local reporter and news anchor in a number of cities across the country,

What are you doing now?

I’m the Vice President and Chief Content Officer for PenFed Digital, a team that produces and shares stories of service, inspiration and resilience on PenFed Credit Union social media platforms. When I created the team two years ago, PenFed’s social media reach was minimal. Last year, we reached more than 81 million people, just on Facebook! Because of our success, we recently launched an external business providing content strategy and production to non-profits and corporations. It’s tremendously rewarding to share what we’ve learned and to help others achieve their goals. I’m incredibly proud of the team I’ve created, including three former journalists, a Marine Corps veteran and a military spouse.

I must have been a strong-minded five-year-old because I made two major life decisions at that age: to become a journalist and a strict vegetarian. Both came true and endure to this day! I strongly believe everyone has a story if you just take the time to listen. Growing up, I always viewed journalism as a calling, not a job. I knew it could be very powerful–exposing injustice, holding officials accountable and affecting positive change. Journalism matters and a free press is critical to our democracy. What a privilege to have covered major events around the world, and even traveled weekly on Air Force One with President Clinton.

There really never was a second career choice, although my love of animals did briefly inspire me to consider becoming a veterinarian.

How did you get your start?

I’ve had an unconventional career and lived in every part of the country by design. What better way to learn what was important to people in different regions of the United States? That definitely helped prepare me for becoming a national network correspondent.

My actual start in the industry was in my hometown of Hartford, Connecticut. At the age of 12, I had a paper route, getting up at the crack of dawn and delivering the Hartford Courant! Apparently, I was the first “paper girl” in the state of Connecticut. My actual career started with an internship and later a research job at CBS News in London, England. After that, I climbed the ladder from small market newsrooms to Washington, DC, and network gigs. I’ve lived in Savannah, Wichita, Portland (Oregon), Miami, Los Angeles and DC, in addition to London.

I’ve always been a champion of the underdog, so the stories that moved me the most were the ones through which I was able to help someone. I convinced an insurance company to reverse its decision and pay for a lifesaving surgery for a cancer patient. One of my investigations successfully moved a young man suffering from extreme mental health issues out of solitary confinement in a state prison into a psychiatric hospital where he could get the treatment he needed. I was able to reunite a young man with the father he’d been desperately trying to find for 30 years, resulting in an emotional and happy reunion. The father had not known of his son’s existence and the two quickly bonded.

Journalism is often about trust and in an extraordinary series of events, I was tipped off and able to rescue a six-week-old baby who had been abducted by her mother, triggering an Amber Alert. In my last six years, I focused on issues facing active-duty service members, veterans and military families. I did so while raising four consecutive service dogs on the job! That ended up not only being life-changing, but pivotal to my career move to PenFed.

What were the best and worst parts of your job in the media?

The best part of my long career in journalism was the opportunity to meet people I would not otherwise encounter and travel to places I would likely not have seen, if I wasn’t a reporter. Above all, it was the mission of telling the poignant, memorable stories of others. Thankfully, my career transition allows me to continue doing that, but unlike traditional news, every piece of content produced by PenFed Digital is positive and inspiring! That’s been refreshing and wonderful. I’ve also enjoyed being able to teach others, whether as an adjunct professor mentoring university students or as a media trainer and content strategist showing clients how to leverage the tremendous power of social media for the greater good.

The worst part of my job was covering snowstorms in DC!! We had to stand outside for hours, telling people not to go outdoors. And even if the snow hadn’t started falling or the accumulation was minimal, we had to come up with something to say every hour or more. A close second would be covering Black Friday shopping, year after year after year, and always trying to come up with a fresh angle!

I think the media needs to regain and retain the respect of the nation. It saddens me that we are emerging from an era where people called the work of journalists “fake news” and I’ve witnessed reporters being bullied or threatened for simply trying to do their jobs. Whenever someone starts bashing “the media” around me, I politely stop them and ask what industry they’re from. And then I ask if everyone in their industry is equal and whether they would like to be generalized and/or stereotyped in a similar way. That’s always led to a civil, and often lively, discussion.

I’m a veterans’ advocate and proud Ambassador for the Armed Services Arts Partnership, a terrific non-profit that teaches combat veterans and military family members standup comedy, storytelling and other artistic endeavors, free of charge. I’m also on the Board of America’s VetDogs and the Guide Dog Foundation for the Blind and am passionate about telling the world about the healing power of service dogs. When I’m not volunteering, I love spending time with my family, traveling and hiking in national parks.

I try to support small businesses whenever I can, especially if they’re veteran owned and operated. My energy level is a testament to the quality coffee I drink each day, produced by Veteran Roasters, a Chicago-based business that employs formerly homeless veterans and helps to restore their dignity.