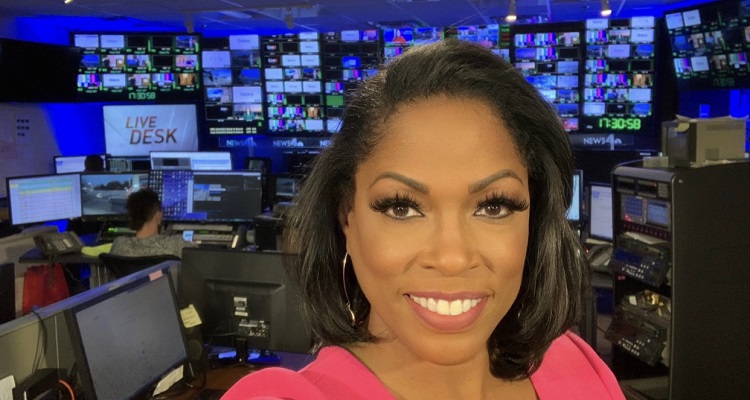 Capitol Communicator has been interviewing people who are or have been in the media about their careers and the media.  Below is our Q&A with Shawn Yancy.  Yancy kicked off 2021 by joining WRC-TV, also known as NBC4.  Prior to NBC4, Yancy spent 19 years at WTTG-TV in Washington and has won several Emmy Awards and an Edward R. Murrow Award for an investigative story about NIH.

Shawn, what are you doing at NBC4?

I’m an evening news anchor at NBC4, the #1 news team in Washington, D.C.

I knew I wanted to be a broadcast journalist when I was in third grade. I was inspired by the first Black news anchor in the state of Indiana. Barbara Boyd anchored the weekday noon newscast for, at the time, WRTV-TV. My father, a pediatrician, was a guest in her “Ask the Doctor” segment. Because of their connection, I got to know her and knew I wanted to be like her when I grew up.

I have a second career. I’m a professional artist. I have clients nationwide. I dabbled in art at a young age. It began as a hobby, but became a career once I got noticed and clients started buying my work.  You can check  it out at www.shawnyancy.com.

I got started as a broadcast journalist in high school. I was a news anchor/reporter for The Indiana Black Expo’s Youth Telecommunications workshop. The experience allowed me to be the only youth reporter for the Pan-American Games in 1987.

I earned a Bachelor’s Degree in telecommunications from Ball State University. My first broadcast job after college was at WFMS-FM in Indianapolis. I was the public affairs director and a news reporter.

What type of stories move you the most?

Inspirational stories about real people. I love sharing stories about people who overcame the odds or people who are changemakers in their community.  For example, I’m been working on a story about the first Black woman to own her own liquor brand. She’s an inspiration to young women everywhere. During and after the presidential election, I had the opportunity to do a story on Vice President, Kamala Harris. I spoke with her AKA Sorority line sisters about her inspirational journey to becoming the first Black and person and the first person of South Asian descent to become Vice President of the United States.

Another story that stands out is about a young child who took his own money to put together care kits for people suffering during the pandemic.

Real people who are working to make the world better move me.

What’s the best and worst parts of the job?

The best part of being a broadcast journalist is that it allows me to meet so many wonderful people and provides me the opportunity to tell and share their stories.

The worst part are the hours. Because news never stops, we’re always working 24/7. We don’t get snow days. We also work holidays. We’re often working at odd hours opposite of our friends and loved ones.

Who are your media role models?

Here in the DC area I’m grateful for people like: Lark McCarthy, Andrea Roane, Jim Vance and Jaycee Hayward. They paved the way for journalists like me.

I think one of the biggest challenges is adapting to how people get their news. People are getting news from social media and from apps. The news media has to be ready to take on the “if you can’t beat them, join them” mentality. NBC Washington has done a great job of connecting with viewers where they are – whether it’s on twitter, Facebook or via a streaming service.

When I’m not at work, I enjoy spending time with my husband, our three sons and our two dogs. Pre-pandemic, I loved to go out and try new restaurants. I also enjoy travelling and painting.

I believe in giving back to the community. Eleven years ago, I started Girls’ Night Out by Yancy. Two years ago, we became a 501(c)(3). Our mission is to improve the lives and empower the futures of underserved women and children. We have several programs that provide: personal care essentials for women and children living in shelters for victims of domestic abuse; school supplies and backpacks to elementary students at Title 1 elementary schools. We also provide hundreds of new winter coats, hats and gloves; and hundreds of toys to kid for Christmas.  In 2020, because of the fallout from the pandemic, we also began providing hundreds of meals to area families in need.