Hundreds came out to a dedication of the Guardians of the First Amendment Memorial in downtown Annapolis June 28, exactly three years after a gunman murdered five journalists and staff at the Capital Gazette newspaper. It remains the deadliest single attack on the media in American history. The memorial is meant to help the community remember those lost and to reflect on the meaning and importance of the First Amendment, and in particular the importance of a free press. 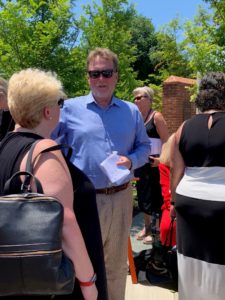 Also addressing the crowd was reporter Phil Davis, who live-tweeted from under a desk while the gunman was shooting; Rick Hutzell, former editor of The Capital; Alan Hyatt of Severn Bank and Trif Alatzas, publisher and editor in chief, Baltimore Sun Media.

Hutzell asked that anyone who cares about journalism to subscribe to local news outlets.

“If you care about journalism and truth and freedom of the press anywhere, subscribe to your local news organization, whether it’s a newspaper or a digital new service or something because that’s the only way they will survive,” Hutzell said. Former Baltimore Sun reporter Laura Lippman, now a best-selling mystery author, spoke about the newsroom life. The keynote, titled “The Death of Truth,” was delivered by David Simon, also a former Sun reporter and creator and an executive producer of the HBO series The Wire. Simon worked with, and went to the University of Maryland with, some of the victims.

The memorial at Newman Park along Compromise Street includes five pillars to represent the five lives lost in the shooting: Gerald Fischman, Rob Hiaasen, John McNamara, Rebecca Smith and Wendi Winters. It includes a panel showing the First Amendment and a bronzed front page displaying The Capital‘s next-day reporting of their co-workers’ murders.

“If you worked at The Capital or you work at The Capital, please stand up,” Hutzell said, after addressing the families of victims.

“You are the memorial,” Hutzell said.

Organizations leading the effort to build the memorial include the Martin Luther King Jr. Committee of Anne Arundel County, the Caucus of African American Leaders, the State of Maryland, Anne Arundel County Government and the City of Annapolis.