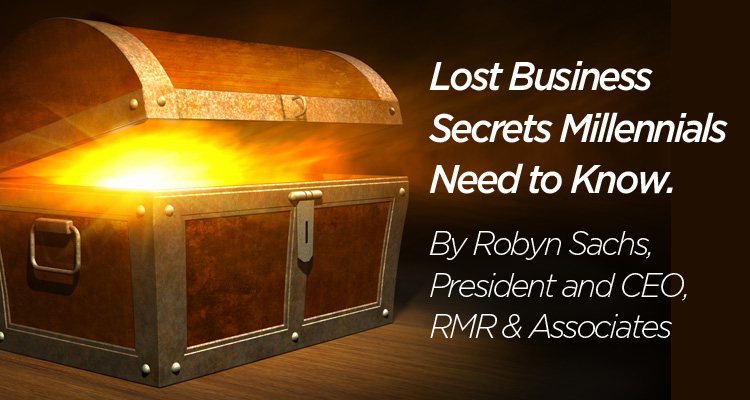 Much has been written about how to work with millennials: what they want from their jobs, how they differ from previous generations, how to keep them happy, etc. All good to know. But in focusing so heavily on their needs, it seems no one explained to them what they need to do to have a successful career.

First, let me be clear. We love our millennial employees at RMR. Every semester, we recruit the most promising for our robust intern program. We understand that as new grads, they’ll need lots of guidance. But recently, I’ve noticed some alarming trends among the applicants. Whatever they may have learned in college, they missed out on some very important lessons.

It’s not their fault that they weren’t taught these basics. But this lack of knowledge is going to hold them back…unless they learn it now.

Feel free to share this with the millennials you know to help them reach their potential and enjoy satisfying business careers.

It’s true that we live in a much more casual society than even just a decade ago. Many former rules of etiquette, both for business and social settings, have relaxed greatly. But one thing that still matters is knowing how to show your appreciation with some kind of thank you. In business, that means when a co-worker, client, your boss or a prospective employer goes out of her way for you, a thank-you note is a must.

College career counselors must have stopped advising students to send thank-you notes after interviews, because many don’t send them. At RMR, only those who send a thank-you note are considered for job offers. And while email is acceptable, a hand-written note makes you stand out.

It’s not your fault if you didn’t learn this. But when others send thank-you notes, and you don’t, it’s noticeable. And not in a good way.

It’s also unfortunate because sending a thank-you is another chance to get your name in front of the interviewer. After conducting numerous interviews, names and faces can become a blur. But when your thank-you note arrives, they look at your resume and their notes again and they remember you.

Saying thanks isn’t something you do just to get a job, either. It’s a way of life. Someone who knows to send a thank you tends to be appreciative in other ways. One of my long-time employees recently sent me a hand-written note after our office holiday party where I had given each employee a special gift.

Now, she is already a valued employee. She doesn’t need to get on my good side. But sending such a gracious note impressed me. It showed that she appreciated the time and effort I took to choose a gift for her, and yes, the money spent on it and the dinner, as well. Rather than sliding her note onto my desk, she stamped and mailed it, making it that much more official.

You may be thinking that no one sends thank-you notes anymore, and you’re partly right. Many people don’t. That’s all the more reason for you to stand out by being one who does. As one millennial recently said, “It’s such an easy thing to do if you just know about it.”

Maybe it’s a result of social media, which invites you to give a thumbs up, thumbs down or comment on everything from a photo to a philosophy. But in business, especially at the beginning of your career, hold off giving your opinion on everything you’re asked to do. This is the time for you to be a sponge – to soak up all the lessons your mentors are willing to teach. It isn’t the time to be a critic or a judge of the way things are done in your company. I say this gently, but you don’t know enough yet to be critical.

The company that hired you was in business before you came on board, and they’ll be in business after you move on. So instead of wanting to change everything, consider why things are done the way they are. Ask questions. Be curious. Learn all you can. Later, you’ll be expected to know more. Right now, you’re in the enviable position of being expected to listen, learn and give it your best shot. You’ll fall short on some tasks, but that’s OK because you’re still learning. You thought your days as a student ended when you graduated from college? If you’re smart, you’ll be a student for the rest of your life, even after you develop some expertise.

Business professionals are expected to have excellent, error-free written communication. Even a simple typo reflects poorly on your company and on you if your name is on it. Misspelled words? Yikes! It looks like you didn’t even take the time to use spell-check.

You may recall the disastrous outcome when a simple sentence lost its comma and “Let’s eat, Grandma!” became “Let’s eat Grandma!” Fortunately, errors rarely have life-or-death consequences, but they can mean the difference between making a sale or not.

That’s why it’s vital that you proof your work each and every time you write anything, including simple letters and emails.

Famous writers often talk about ripping up an entire manuscript and starting over. If they don’t assume their words are always golden, you shouldn’t either. Our first attempts at anything are rarely our best. Be humble enough to know that.

Paid writers also send their work to their editors to go over it for errors. You don’t have an editor, so you need to proof your work, edit it, proof it again and edit it again. Be aware that your mind will fill in the errors with what you meant to write because you know what you wanted to say. So, read softly aloud to catch these types of errors.

In school, you strive for an “A” and when you achieve it, it’s like a pat on the back that validates you. But you’re not in school anymore. Business professionals always try to produce “A” work for their clients. Just don’t expect a pat on the back for doing so. You were hired to do a job, and your paycheck is your reward. It’s expected that most of the time you’ll deliver “A” level work, but your boss is too busy to stop and congratulate you. He’s running a business or department, and you’re all part of a team.

So don’t take it personally when your work is criticized. That’s how you learn. And don’t feel slighted when you don’t get accolades. You were in school for many years, so it’s a hard lesson to learn. You’re a business professional now. There won’t be ribbons for every achievement, or trophies just for showing up. Satisfaction will come in the form of new business, happy clients and increased profits for the company. If you work hard, including assimilating these tips, raises and promotions will become your validations. And that’s a lot more gratifying than looking at a trophy catching dust on a shelf.

This post is part one of a series by Robyn M. Sachs who leads RMR & Associates, Inc., an award-winning PR firm, as President & CEO for over 25-years. You can read part two of this series here.

Robyn M. Sachs enthusiastically leads RMR & Associates, Inc., an award-winning PR Firm, as President & CEO for over 25-years. RMR has earned a reputation for aggressive campaigns that produce measurable results for a diverse client base. Robyn is well known and respected in the business community for her insight and keen knowledge of marketing techniques, as reflected in her award of the Ernst & Young “Entrepreneur of the Year” distinction. She shares this acumen at well-attended speaking engagements throughout the Washington, DC Metro Area.