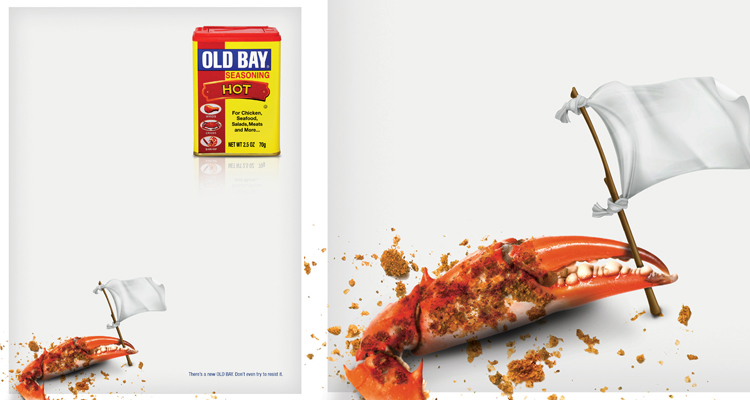 Baltimore-based MGH has won a national ADDY at the American Advertising Awards for its work on behalf of client OLD BAY. The award was received for a newspaper ad created to launch OLD BAY HOT, which featured a crab waving a white flag in surrender of a can of OLD BAY HOT seasoning. In the ad’s category (Newspaper Advertising – Full Page), it was selected as the best ad out of work from agencies across the country.

The national American Advertising Awards ceremony took place June 7 at the American Advertising Federation’s annual conference, ADMERICA, in Anaheim, Calif. MGH was the only Maryland agency to receive an award at this year’s national competition. Receiving the award also marks the second year in a row the agency has been recognized at the national level for its OLD BAY advertising work.

“We have been thrilled to work with OLD BAY for the past five years to help grow the brand, and receiving national recognition for the second year in a row is a true honor and testament to our hard work,” said Jane Goldstrom, president and chief operating officer of MGH. “It’s also further proof that great advertising work is no longer confined to cities like New York, Chicago and Los Angeles.”

The OLD BAY HOT ad previously won “Best in Show” at the Baltimore competition level of the American Advertising Awards. The ad went on to win at the District II level, which included entries from New York to Washington, D.C., and moved on to the national competition. In 2015, MGH received ADDYs at the local, district and national levels for a two-page newspaper ad the agency created to celebrate OLD BAY’s 75th anniversary.