Home
B to C

I was at CES 2018 in Las Vegas last week, and saw thousands of new tech tools, toys, devices, and services being introduced and promoted. There are too many cool, interesting and intriguing new products to review all of it in one short sensible piece, but I do have a couple of important observations on the big trends for you.

Two big waves of tech innovation are headed your way fast. One is big, obvious, and life-changing… maybe world-changing. The other is small, almost invisible and very subtly world-changing.

One – self-driving vehicles – cars, trucks, taxis and more. Yes, they are here…today. And CES had all facets of this new world on display, a week ahead of the Detroit Auto Show. Some of these technologies are already on the road, and just waiting for laws and regulations to catch up, to make the autonomous driving and everyday occurrence.

Two – Here comes more, better, and faster connectivity for your connected life. 5G connectivity and super-fast and inexpensive WIFI and Bluetooth connectivity are being built into everything in your life, from your car, to your home, and your refrigerator to your running shoes. This new generation of super-fast chips and protocols for your smart phones, wearables, and all kinds of other data consuming (and data collecting) devises are making it possible to connect almost every aspect of your life. And there’s already a big, invisible rollout of the infrastructure to make all of that possible – think Verizon and AT&T. 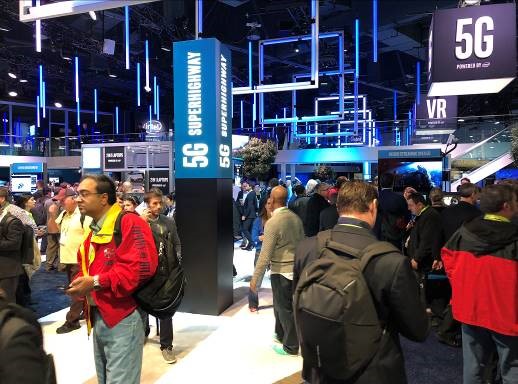 Intel promoting the promise of the 5G super-highway… fast, seamless connections… to everything. Your autonomous self-driving transport… next gen. Toshiba “Smart Speaker” internet devices and apps – designed to “connect” your life. (like its competitors Alexa and Google Home)

The Consumer Electronics Show in Las Vegas, isn’t the first place we see all of the new tech… those of us living in the tech world read about all of this stuff online during the weeks and months between each big show… but its at CES, where we see what the big consumer electronics brands are going to be pushing to consumers in the next year.

Qualcomm, Samsung, Google, Intel, Bosch, Toshiba and Sony, were all showing their take on the “Connected Life” … They are positioning your smartphone as just one part of “your network”…your network of home controls, car devices, health monitoring and entertainment that is becoming easier and easier to tie together. They are all striving to make it easy, seamless, and safe to create these connections. Imagine your home knowing you are headed home, because your phone’s GPS told it you were leaving work, and without you doing a thing, the house knows to turn on the lights, crank up the heat, cue up some relaxing music, and preheat the oven… that’s a connected life.

I think they’ll start telling us that’s the “Smart Life”…as a natural extension of the Smart phones, Smart TVs and Smart homes, they’ve introduced us to in past years. You heard it here first… the next big waves… your “Smart Life” of seamlessly, and wirelessly, connected devices, and your self-driving car. It’s not Star Trek yet … and not quite the Jetsons either… buts its getting pretty close. The increased speed and connectivity of 5G and new sensors are making the Connected Life possible. Virtual Reality was everywhere. Over the last couple of years, we saw Virtual Reality (VR) headsets being featured and promoted by the big consumer tech brands, from internet giants Facebook and Google, to electronics brands Samsung and Sony. But this year, I saw VR headsets being “USED” everywhere. Every other booth seemed to have some kind of Virtual Reality demonstration of their product or service. Visitors to their booths strapped on the headset, sat down in a chair, and took control of a virtual world. The point is, Virtual Reality, Augmented Reality (AR), and this year’s term, Mixed Reality (XR), are now part of the every day tool set of product marketers, product developers and brands big and small. This new medium is providing an opportunity for brands and service providers to create worlds of their own making… and new consumer experiences. Look out for a VR product demo or brand experience at a website near you… a new medium has been created. And this is very much like the Star Trek holodeck… very much. Samsung had a huge Virtual Reality experience booth at CES. Visitors could put on their Samsung GearVR headset, get strapped into a rumble seat, (a seat with motion and sensory feedback), and then take a bone shaking, ride down an Olympic bobsled run, as a hydraulic platform raised, lowered, tilted and jolted the chairs. This mixed reality of the virtual world and the real-world motions of the chairs and platform, induced lots of laughter, and screams, and looks of both panic and joy, as the participants raced down the track at breakneck speeds… but of course it was all virtual… or maybe… almost all virtual. The panic and joy looked very real. Samsung – participants were strapped into a rumble seat for a full-on Virtual Reality… and some say Mixed Reality… experience.

Hand held 3D scanning was the coolest tech I saw at the show. Its now possible to scan in a human being, or large or small inanimate objects, creating an instant 3D model that can be used in other design programs or virtual environments. The scanning portion is not new, but the real time handheld scanning is, (at a business affordable price – about $10-25,000). This woman was 3D scanning a car bumper into a 3D modeling program with a handheld scanner. The scan appeared on the big screen, in real-time. And of course, Spider-drones are cool… and scary. Nvidia was showing off their work on self-driving race cars. And Bell Helicopter was showing their take on the self-driving “air taxi”. QUALCOMM was highlighting connectivity and sensors, with the use of their Snapdragon chips in wearable computers, from wristbands, to necklace pendants (kid trackers and pet trackers), to insole cushion fitness trackers.