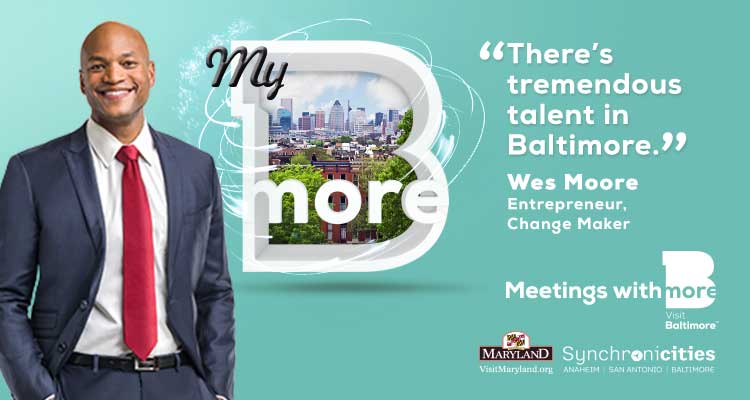 Visit Baltimore, the city’s official sales and marketing organization, announced the addition of three new dynamic personalities to the “My BMore” campaign, a meetings and tourism advertising campaign launched in April 2015 to showcase Baltimore through the lens of key visionaries with authentic connections to the city.

According to a release, the new ads are intended to highlight aspects of Baltimore’s varied attractions and meeting spaces and focus on the city’s nationally recognized hub of talent, technology and medical resources as part of targeted convention sales vertical marketing efforts. In their ads, Moore, Meyer and Peterson leverage their own experiences to position Baltimore as an ideal destination for meetings and conventions as follows:

Talent: Moore’s ad invites meeting professionals to discover the robust community of talented individuals in Baltimore. The city has one of the highest concentrations of educational service companies and organizations in the nation, helping to propel Baltimoreans to excellence across multiple key industries.

Tech: Meyer taps the city’s powerhouse of innovation and technology to showcase how it can help launch a big idea.

Medical: Peterson touts the unparalleled world-class medical resources, such as Johns Hopkins: the number one hospital in the country for two decades, which make the city synonymous with cutting-edge health care.

“Through the My BMore campaign, we continue to invest in the future of the meetings and tourism industry in Baltimore,” said Sam Rogers, chief marketing officer and executive vice president of Visit Baltimore. “By adding new well-known personalities, our messaging continues to break through the clutter with familiar faces that bring the city’s stories to life in an engaging and authentic way.”

The ads will run as full-page print and digital video concepts to further spread meetings-focused messaging in key industry publications including Black Meetings & Tourism, Meeting Professional International’s The Meeting Professional, The Professional Convention Management Association’s Convene; and the American Society of Association Executive’s Associations Now. Additionally, the campaign will launch a leisure-focused ad featuring Moore to highlight Baltimore’s colorfully diverse attractions in the form of festivals, museums, music and cuisine, which will run in regional travel and general interest magazines.