Home » Digital Marketing Updates You May Have Missed 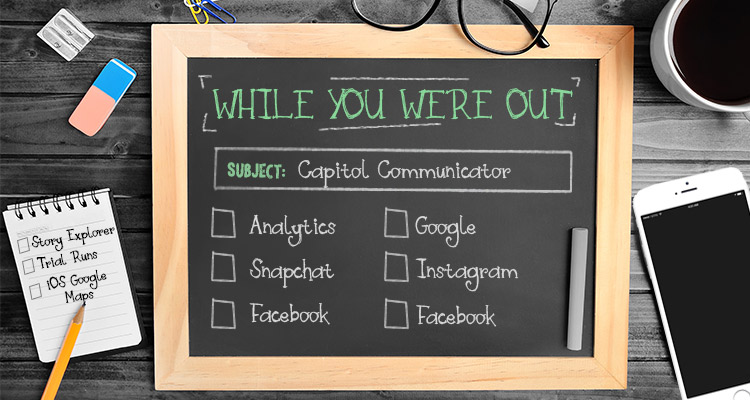 Digital Marketing Updates You May Have Missed

The release of more than 25 relevant updates has our ears ringing! From new releases of Google Maps and Google Photos to Facebook’s work-friendly platform, this holiday season is definitely one to be grateful for. So, snuggle up by the fire and substitute your book for this reading material.

With mobile app usage growing roughly 90% in the past two years and contributing 77% of the total increase in time spent on digital media, it’s no surprise that companies are turning to mobile applications for their next big move. Google recently brought ‘Trial Runs’ to mobile ads, allowing users to test an app for 60-seconds or less without downloading it. Furthermore, to follow the Google AdWords application release for Android, Google announced the release of a Beta AdWords application for iOS on Twitter.

With Google’s release of more than five business-related updates since December 1, it seems like Google hasn’t taken a break for the holidays! Google Maps for iOS has been upgraded to include 3D touch integration, offline navigation, local gas prices and more. Speaking of maps, business owners can now reopen or close businesses on Google’s new map interface, making it easier to communicate with and inform customers. And, yet again, Google has continued to remove Google+ local features, this time by removing local listings.

Since marketers are considered data scientists these days, it’s important to keep up-to-date with the most recent advertising, reporting and optimization trends. A recent release of Smart Goals by Google Analytics used in AdWords will help optimize AdWords conversions through identifying the highest-quality visitors to a website and automatically optimizing campaigns for those visits. Facebook has opened the door to understand consumers on Instagram through adding the ability to create Instagram Ads through Facebook’s Power Editor. For businesses that rely on reviews for customer acquisition, consider adding an ad extension onto your advertisements because Google has removed social extensions from AdWords ads.

2016: The Age of Connectivity and Speed

We’re beginning to see the start of social media becoming the new “IT” product for organizing consumer lives through improved connectivity and a faster interface. Snapchat now allows linking to its content from anywhere outside the app. Google’s Accelerated Mobile Pages are said to be in effect in early 2016, with a ranking boost to follow; naturally, Twitter, LINE, Viber, and Tango will begin using AMPs in early 2016 as well.

Facebook has been busy, busy with some very businessy updates

Facebook has unofficially released a Professional Services platform that helps users find nearby businesses. For businesses that use Facebook, there is now a Page plugin that connects a Facebook Page to a website. It was also announced that there are new tools available to help Page managers utilize communication with customers that include a redesigned Inbox and an easier way to keep track of comments. Last but not least, keep a look out for Facebook’s professional version called ‘Facebook at Work,’ as it is expected to be released soon.

Social media companies have been quite busy improving and encouraging image-heavy user content. Snapchat has released Story Explorer, a feature that gives users the ability to see different perspectives of a similar moment. Twitter is introducing an improved photo experience by no longer cropping photos posted in Timelines. YouTube has released a Trending tab, giving visitors a full picture of what the world is watching. Google introduced a way to share memories through shared albums in Google Photos, and Yahoo! has announced the release of a virtual reality Flickr app to Samsung Galaxy smartphones.

Facebook, Twitter, Tumblr, and Bing, oh my! Facebook has enabled the ability to post comments while offline, or in bad connection. Twitter is also looking into promoted Tweets that can target audiences who do not login to an account and a new timeline format that sorts Tweets by relevance. Tumblr is now promoting an update that gives users the opportunity to send posts through messaging. Bing added Uber into its iOS search app giving users real-time map data when looking for a ride, and Facebook Messenger added Uber to their application enabling users to request rides and receive updates on drivers’ status  – and your first ride’s free up to $20!

To learn more on the topics covered in this series, please visit the website of Carousel30, a Capitol Communicator sponsor.