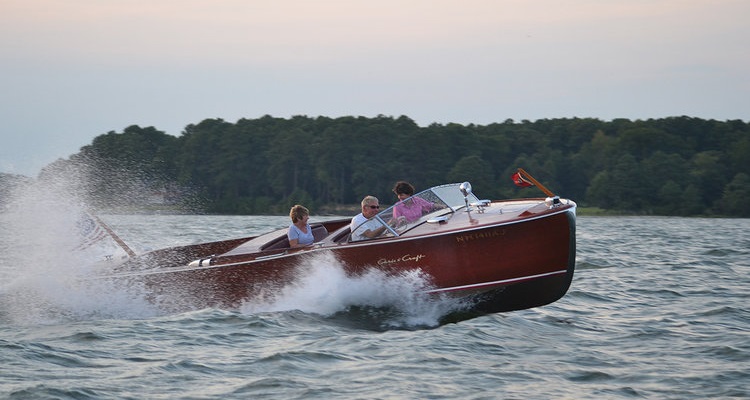 Matt Smith, CEO of Falls Church-based SmithGifford, loves marketing and, as it turns out, he also loves classic boats.  And, Smith was featured Sunday, Aug. 30, on the CBS Sunday Morning program in a feature on “woody boating”.  Smith, in addition to his work at SmithGifford, runs a website that provides readers with a wealth of information about classic boat culture and classic boats – such as Smith’s 1948 Chris-Craft, pictured above.

Check out the CBS Sunday Morning segment below.

Capitol Communicator asked Smith how he became involved in “woody boating”. He told us:

“Eight years ago, I faced what many 48-year-old creatives faced back then. I had no real understanding of how I could fit into the new digital era. Oh, I knew it was the future, heck, I was already becoming the past. So, I combined two things I knew nothing about and wanted to know more about – digital marketing and the wooden speed boat that  I was about to have restored. I also noticed that the hobby of classic boating itself was having the same issue – it wasn’t growing and was, in fact, shrinking because of an aging audience. So, I literally sat in front of my computer and said “what the hell”.

“My long-time friend and former collage pal Scott Sawyer in San Francisco was learning about Blogspot and set me up on Blogspot. It was free, and dumbed-down enough for an Art Director to understand. Which took me almost a year to figure out. When you have spent 30 years at TV commercials and print, it can be daunting to change your mindset. But I did. I dove in and took the plunge, same with the boat so, in a sense, Woody Boater and my boat were built together.

“It all started out as a way for me to learn and we had about 1,000 hits the first two years. But the good news was that I could screw up along the way. No one cared and that was great. I recall a day that I was saved thousands of dollars on my restoration because a reader pointed out a mistake. He saved me, and that’s when I knew this was a new world. I decided that I would try for a story a day! Could I even find something interesting each day? I learned what works, what doesn’t, and got to know a community, heck, created a community with Woody Boater, which is now roughly over 250,000 unique visitors a year. With around 2.5 million clicks, I have been inducted into the Hagerty Marine Hall of Fame, won countless ADDY’s; and the site is the only daily news source for what we now call the “classic boat culture”, making it the largest Wooden Speed Boat website in the world.

“We have been helped by wonderful creatives and digital folks along the way that are also Woody Boaters. I often think that while many in the marketing world learned digital from a technical point of view, I learned it from a branding point of view – something that is far far richer and timeless. Great content and a great brand trumps all of the technical stuff.  But the most wonderful thing of it all is that its effected how the agency thinks. We are a completely integrated agency with a focus on what we call “Big Content” for all mediums. Content that is focused on a big idea. Not chasing “flash in the pan” technology, clicks or new formats.

“So, in a sense, my 1948 Chris-Craft taught me how to enter into the digital age and win!”

(Smith has been profiled in Capitol Communicator’s “up close and personal” series and you can check out his profile here.)