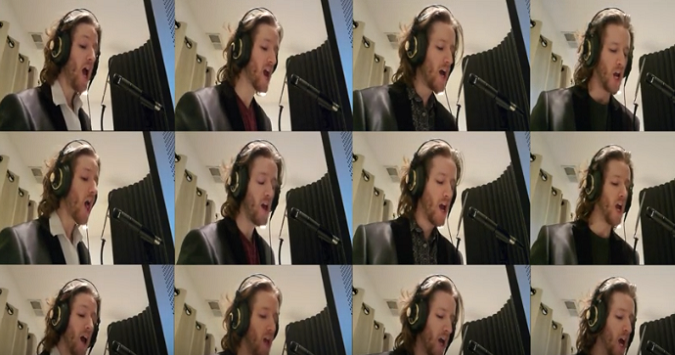 It’s that time of year again when cheesy ad messages and made-up names like “Black Friday” and “Cyber Monday” become ubiquitous, all in an effort to inspire you to buy stuff.

To be honest, as far as I’m concerned it’s all #Hell.  I know I sound cynical, but that’s partly because I’m already over the holidays; I’ve been working on holiday ads since August, and now that they’re done I’ve already moved onto spring sales campaigns.

But every now and then I’m reminded of the true majesty of this time of year. And that includes the beauty, grace and inspiration of great holiday music that isn’t of the “Ugly Holiday Sweater” variety, but just pure, classic holiday songs, concerts and carols.

And that brings me to the primary topic of this column, an amazing young, D.C. area-based artist named Aaron Gage.

Aaron is a multi-dimensional, award-winning composer, performer and musician who created one of the most original holiday videos I’ve ever seen.  It’s a version of the famous Hallelujah Chorus from Handel’s “Messiah” in which Aaron sings every part himself. That’s right. He covers the soprano, alto, tenor and baritone parts in a multiscreen video broken into all four ranges in which he even wears a different outfit for each part.  It’s pretty amazing, and like nothing I’ve ever seen. Take a look below.

How did he do it?  I’ll let Aaron explain it himself:

“I created this piece by first loading an instrumental version of the “Messiah” through electronic sequencing. I then layered each voice part in triplicate in order for each voice part to sound like a section of singers rather than one singer at a time. In total, there are 12 vocal tracks (four total sections and three on each part). Some light EQing and reverb helped create the atmospheric feel of a concert hall. No pitch correction or auto tune was used. After all the audio was recorded, I filmed myself singing along to each part 12 times in one take. That way I could synchronize the video with the audio. I specifically wore four different outfits in the video to distinguish between vocal sections.  The audio was recorded in Logic Pro X and the video was edited in Final Cut Pro. The process from start to finish took about six or seven hours.”

This guy is so good I’m already envisioning a new concept for a spring campaign with him doing all the music.  Maybe it could be themed around #Me Monday—a special day where consumers buy stuff for themselves.  Or how about #WhoAmIWednesday, a day in which you can discover yourself. Or maybe #CloneThatDeal Friday—buy one and get 30 more at the same price.  The possibilities are endless.

If you want to learn more about Aaron, check out his website here: https://www.aarongagemusic.com/.

In the meantime, I wish all of you a very joyful holiday break. We all deserve it.

Matt Smith is founder of SmithGifford and has close to 40 years’ experience as a creative and agency leader at the nation’s top agencies. SmithGifford is a Capitol Communicator sponsor.