Home » Did You Miss These Items of Interest? 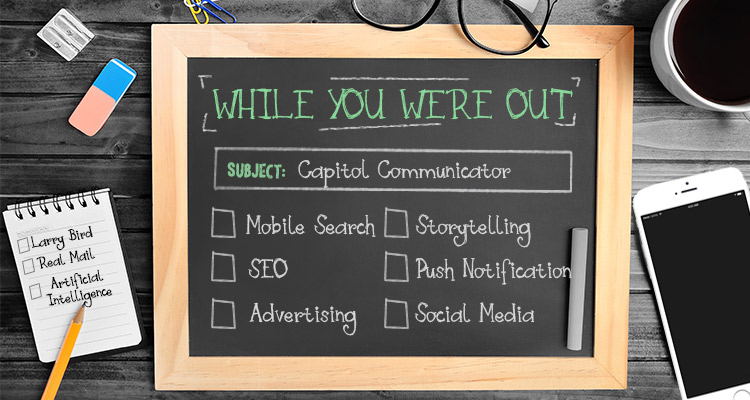 Did You Miss These Items of Interest?

We all get busy and sometimes, and important items pass us by. Every other week, Carousel30 will be collecting the important stories for communicators that you may have missed while crunching on a deadline or taking a much-needed vacation before the holiday rush begins.

Here’s what happened while you were out…

Google and Yahoo: Reunited and it feels oh, so good

In Yahoo’s quarterly results released about a month ago, there is an indication that the company and Google rekindled their relationship after a hard breakup. The new deal will last for three years, and Yahoo will be allowed to post Google’s editorial “free” listings and ads in exchange for a cut of Google’s AdWords revenue. Don’t get too worried about this new relationship because if you’re thinking Google has taken over, watch out for Bing because they just turned a profit.

Earlier this year, Google announced that mobile searches have surpassed desktop. Since then, Searchmetrics has proven mobile’s importance as a result of mobile-friendliness playing a role in website ranking within search engines. Brands have been taking note as reports show that mobile searches account for 40% of all U.S. digital search ad spending in 2014, and is projected to break 50% of total searches by the end of this year. With companies that use the mobile-only Instagram platform as a marketing tool expected to double during 2016, brands should begin looking into mobile-specific campaigns.

A report published by Retale indicates that 89% of millennials are likely to act on a received push notification, with males 6% more likely to do so than women. Appboy also reported that with just one push notification, brands could see a 71% increase in user retention over a two-month period. With the rise of mobile browsers and mobile apps among this key demographic, it is not surprising that push notifications have become an integral part of the mobile experience.

Twitter has literally reached new heights with all of the brands’ releases in the past two weeks. Getting a majority opinion just got a whole lot easier with Twitter Polls. Twitter’s Conversion Lift allows for more accurate targeting, and has proven that Promoted Tweets are 1.4x more likely to result in conversion than normal Tweets. Twitter’s collaboration with IBM’s Insight Cloud Services allows brands to stream data insights across various industries. The announcement of Gnip Insights APIs revealed two new APIs for Audience and Engagement. Not to mention to track all the above changes, Brand Hub now allows brands to identify key audiences, trends and conversations that relate to their brands.

Bringing the Internet to Your Mailbox

37% represents the increase in performance a campaign can expect to see when using email and direct (snail) mail together. In response, USPS has capitalized on the idea of Digital Mail in New York through Real Mail Notifications that send an email to receivers of the mail they should expect to receive the following day. Remarkably, USPS has seen 93% of users opening email alerts within two hours of receiving them each day. Not too bad for a Direct Mail company that has taken the road less travelled and enhanced the omni-channel approach, rather than the multi-channel approach!

Once Upon a Time…

You don’t have to visit Disney World to make your dreams come true! The marketer’s dream of a successful storytelling campaign has only gotten closer to reality as social platforms continue to make sharing experiences easier. Twitter has improved the ability for brands to utilize storytelling through sharing experiences by highlighting multiple Tweets at once, with images and video displayed side-by-side. Similarly, Instagram has rolled out a new feature, Boomerang, that takes a burst of photos and stitches them together into a mini video that plays forward and backward to replay a story over and over and over and over… In addition, you can head to Facebook to get the full story from both your friends and news channels, now with Facebook’s Search FYI.

The Art of Artificial Intelligence

Bloomberg Business revealed Google’s secret to relevant search queries results: RankBrain. The RankBrain algorithm uses machine learning and artificial intelligence to give interpreted search results that provide information that humans wouldn’t necessarily know or recognize. Thinking Uh Oh, SEO like we did? Don’t fret about a changing SEO strategy as a result of the announcement. Gary Illyes, a webmaster trends analyst, on Twitter confirmed that the algorithm has been in effect for months, thus SEO will not be affected. Keep a lookout for other companies such as Apple, Facebook, Microsoft and Bing as they have also been in the artificial intelligence race to use algorithms as well…