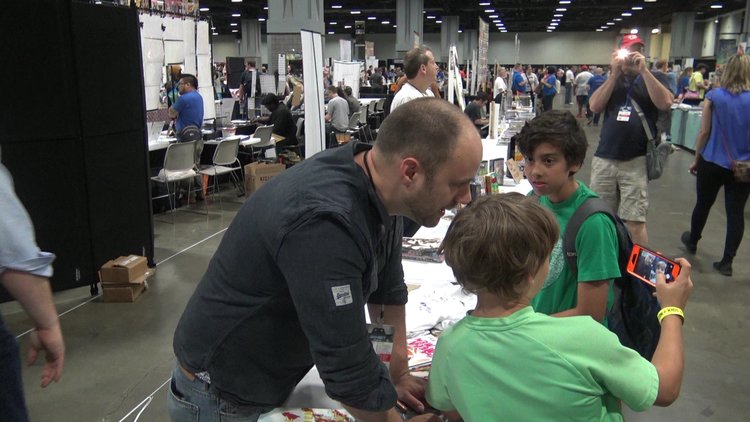 A wise old sage once said: “If you love what you do, you will never work a day in your life.”

That axiom could very well apply to comic book artist and Capitol Hill resident Tom King who, after 17 years of honing his craft, has landed what some might consider the dream job of a lifetime.

Having spent half his adult life in the comic book industry … and the other half working for the CIA … King finds his current position both fascinating and terrifying. With DC Comics rebooting their entire lineup under the overarching brand of DC Universe Rebirth, King’s first venture – Batman Rebirth #1 – is set to launch in two weeks.

Already, through pre-sales, that title holds the unique distinction of being one of the best-selling comics of 2016.

For true aficionados, a preview of what’s to come is already on the shelves.  Earlier this week, DC Comics released Batman Rebirth #1, which King co-penned with Scott Snyder, the Batman author he is poised to replace, essentially laying foundation for King’s solo debut.

“I’m insanely nervous and insanely excited for Batman #1,” said King, appearing this weekend at Awesome Con at the Walter E. Washington Convention Center.  That said, he’s also supremely confident, having mapped out a bold new future for America’s favorite costumed vigilante.  “The first issue will be classic Batman – this is Commissioner Gordon on a roof, this is Alfred in the cave, we’re seeing a Robin-esque figure, Duke Thomas, who is his new ward. The new Batmobile is a take on the classic Batmobile. The whole theme of this book is using every modern storytelling technique I know to connect with classic Batman stories.”

The inspiration for the stories he plans to create is really quite fundamental – the subject matter will come from today’s headlines.

“Batman is the kind of character that lives in the Soul of America,” King said.  “When you look back, he always reflects the times.  Superman, doesn’t grow, doesn’t evolve; but Batman has always evolved and he’s kind of a mirror of who we are.  So I think the Batman we’re seeing now, he has some of the optimism of modern America, granted with a little bit of grit.  But he’s also facing some of those dark threats that he doesn’t quite understand just like we’re facing those dark threats that we don’t quite understand.”

In many ways King, draws upon his seven-year stint with the CIA to define the heart and soul of his Batman character.

“The thing about the CIA is that we get as close to the enemy as possible without becoming the enemy,” he said.  ”That’s what makes it such a special organization — that call to duty to get into the muck with the bad guys without becoming one of them … and when I think of Batman, I think of that kind of character. He gets as close to the insanity of Gotham as he possibly can without becoming that insanity; although he’s always on the danger of going over that edge; which, if you’ve ever read a thriller novel, you know that’s what happens to nearly every operative of the CIA – they come that close to going over the edge.

“Essentially, you see the worst of humanity and you try to come out of every scenario with the best of it.  That’s what the CIA was to me … and that’s what Batman is, too.”

To put those thoughts into perspective, one need only reference the Dark Knight quote from the movie Batman Begins, when he says, “It’s not who I am underneath, but what I do that defines me.”

The same can most certainly be said about Tom King.

(Note: Photo is of Tom King with Batman fans at Awesome-com, held at the Washington, D.C. Convention Center, June 3-5.)